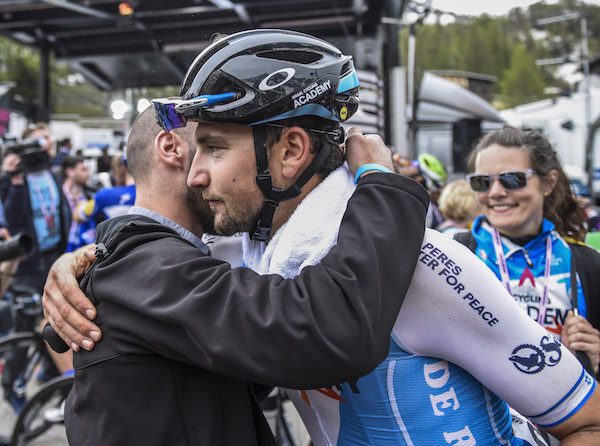 History. They’ve made history. Sweating from exhaustion, exhausted from 3,500 unrelenting kilometers that began three weeks ago at Safra Square in Jerusalem, reaching the heights of Mount Etna in Sicily and the snow-capped Dolomites to the Coliseum in Rome. Guy Sagiv of Israel Cycling Academy has realized his dream of becoming the first Israeli rider to finish one of the three most grueling races in the world, the Giro d’Italia.

“I am thrilled and happy to have met such a challenge,” said Sagiv, just after crossing the finish line at the final stage of the Giro in Rome. “I knew it was going to be hard but I admit I had no idea how difficult it would be. If I knew before the start in Jerusalem 3 weeks ago, how I would have to push myself, if I knew how far and how deep I would have to take my body and my mental strength, I would not have believed I could stand it.”

With great success, Sagiv and his Israel Cycling Academy teammates have completed one of the most intensive and difficult Giro editions in recent years. The squad has met nearly all the goals they had set for themselves, and in the debut of an Israeli team in a Grand Tour, no less. The team rode aggressively, joining many breakaways, including one that almost ended in victory when Spaniard Ruben Plaza finished in second place atop the Prattenoso on stage 18.

“We have ridden an excellent Giro for a team that is not yet four years old. We proved that we belong at the highest levels,” said the Team Manager, Kjell Carlström. “We were persistent and prominent, just a hair away from victory, and of course we arrived in Rome with an Israeli rider who rode a very impressive Giro. I knew Sagiv could stand such a demanding Grand Tour. I saw his progress and his extraordinary determination. But it was a very impressive performance; he showed that he knew how to endure and overcome the pain. He showed that he knew how to take his body beyond what seemed to be his boundary. And what you see from him is just the beginning. The fact is that he finished Grand Tour another rider. He’s already gone up a step. Guy Sagiv will only get better.”

Sports Director Lionel Marie said of Sagiv, “The way he’s managed the 3 weeks shows he can win some races now at this level. It’s fantastic. He has surprised himself.”

Sagiv, who will be in Israel on Monday, is eager to meet the thousands of people who have followed his struggle and supported him as he overcame the most taxing moments of the Giro. “I hope it will give the young generation of riders in Israel the legitimacy to dream that they, too, will be able to do so and to go far. Yes, there was once or twice when I was on the verge of breaking, but in the end what made me not give up was my own belief in myself.”

The owners of the team, Ron Baron and Sylvan Adams, stood at the finish line and hugged the seven riders of the team who had completed this great journey, congratulating them for the performance they gave. “Academy puts Israel on the world map by right and not by grace.” Baron said. “For us it is only the finale of the first part of our journey we began four years ago.” And Guy Sagiv? “He is the hero and the leader of the new generation of cyclists in Israel.”

Sylvan Adams was the driving force in bringing the Giro d’Italia to Israel for a three day Big Start that turned out to be the most exciting stages of the entire Giro. “We achieved almost all the goals that brought to the Giro. We have such pride in the two Israelis who represented us in Giro and helped tremendously to revolutionize awareness of this sport in Israel. And of course, Guy Sagiv, whose performance in this Giro was inspiring. He proved that he is a fantastic Israeli athlete who will now open the way for many to follow. I am so proud of him and proud of the group. We expect to be in Giro next year and in the coming years. For Israel Cycling Academy, this is just the beginning.”