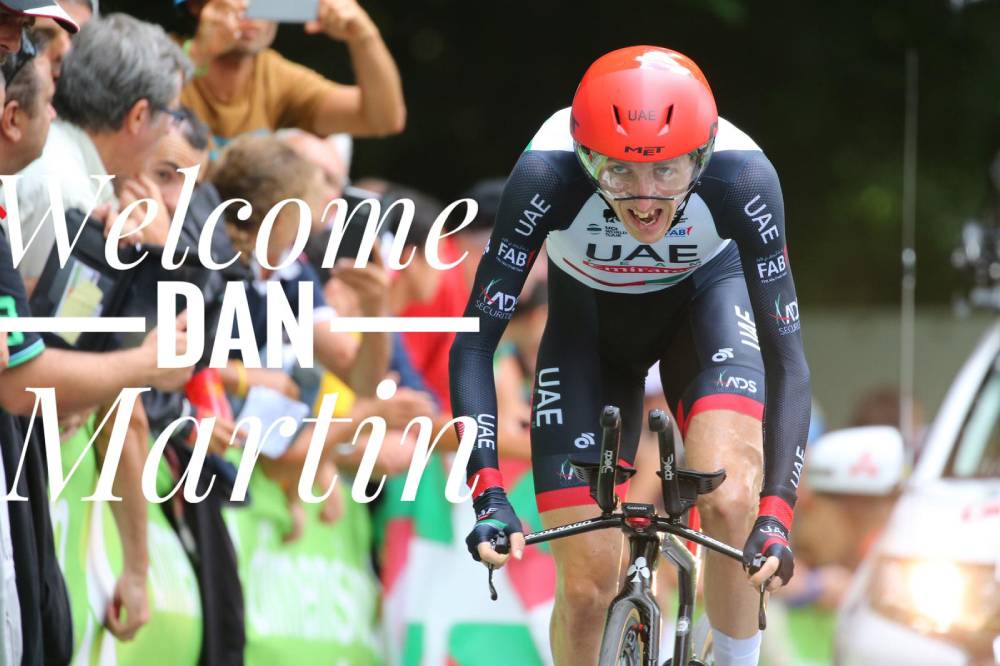 Dan Martin: “By Joining ICA, our Joint goal is to combine our huge appetite for success and to achieve our potential together.”

“I have so much respect for what ICA want to achieve, I just want to be part of it”.

ICA: “It’s the moment to step forward with a big caliber rider who shares our desire to succeed”

Team co-owner Sylvan Adams: “In Dan Martin, we have a bona – fide star and we hope to support him towards many victories.“

The first-ever Israeli pro cycling team is announcing that it has signed its biggest caliber pro rider to date with Irish DAN MARTIN joining the team for two years starting next season.

“We are thrilled to have Dan Martin join our team,” stated the team co-owner Sylvan Adams who is the driving force behind its quest to reach the world’s top level. “Martin is a bona fide star of our sport and we hope to support him towards many victories next season. Dan is a true professional who will be a great asset to our team. He has proven that he can win a single day as well as stage races. Welcome to Israel Cycling Academy. Looking forward to next year”.

Dan Martin, who holds more than 20 carer victories in his impressive Pro tour resume including stages at the Tour de France, Vuelta Espana and the monuments “Liege Bastogne liege” and “ Giro di Lombardia” – has made it clear that for him this is an exciting new challenge that will enhance his career: “I feel it’s time for me to step into a new and exciting challenge. Not only will I be able to help this great project reach its exciting goals, but also a great opportunity for me to refresh myself and improve further.  ICA has shown huge confidence in me – so together we can create something truly special to improve across the board”. I have not reached my peak and I strongly believe that the best is yet to come for ICA and myself.”

These words are music to the ears of the ICA leadership and especially its Pro Manager Kjell Carlstrom who has led this big move for many months. Carlstrom and Team Performance Manager Paulo Saldanha have displayed a vision where Martin can thrive with ICA and lead it to new heights as the team is determined to reach the top level of the sport. “We see Dan Martin as the start of our big leap,” said Carlstrom. “After several years during which we were progressing step by step, we have now found the moment to strengthen the team significantly with a leader of Dan’s Caliber. He will offer the team a lot with his vast experience but even more importantly, he will play a huge role for us as a GC man in stage races. We had a good team in the last few years but now we are stepping up with Dan and with more riders to follow!”

In 5 short years since its foundation, ICA has, against all odds, taken giant steps forward. From a small continental team to a Pro Conti with a unique combination of Israeli Riders and riders from 18 nationalities – the team has leaped forward, breaking barriers along the way. The team made history when it took part in the historic Giro d’Italia that started in Jerusalem in 2018, continued with this year’s successful Giro, with now two Israeli riders finishing a Grand tour for the first time ever.

The team is currently competing for one of the top spots in the pro continental level and has stated its determination to race in the Tour De France as early as 2020.

Dan Martin admitted he was taken by that: “I have seen ICA grow as a team organization from the outside and I am excited to be able to join it now. The belief and support shown to me by ICA is a great reason why I decided that this is a unique opportunity. In the Last 6 or 7 years, I have been following the same pro tour calendar and I am looking forward to changing it a bit and discovering new races. ICA has enjoyed a very good season in 2019 and the roster will be even more competitive in 2020”.

The team is determined to do just that. It has already signed French Hugo Hofstetter to strengthen its Belgian classic squad and is planning further reinforcements to be announced. “We are just getting started” is Mr. Adams favorite phrase. And it’s clearly valid.

With more the 20 wins during his career, the 32 years old English Born has established himself as a top-quality World Tour rider that is capable of winning in grand tours and monuments and as a top-class  GC contender.

Martin, who represents Ireland (his mother is Irish) has been riding in World Tour teams in the last 12 years during which he won Grand Tour stages in the Tour De France ( 2013, 2018) and the Vuelta a Espana (2011) as well as winning one day prestigious “Monuments” Liege Bastogne – Liege (2013) and Il Lombardia (2014). A world-class climber, he is a proven top GC rider that has won stage races such as like Vuelta Catalunya and has finished 6th overall in the Tour de France 2017 and 8th in 2018.