Hugo Houle’s summer of success continued at the Arctic Race of Norway where the Canadian battled to finish in second place on the General Classification after crossing the line in fifth place on the final stage.

“I’m really happy with the way I raced here all week, and the way we raced as a team as well. A big thanks to all of the guys in the team, we had a good group here and without them, this result wouldn’t have been possible. It’s another strong result and I did my best so I am happy,” explained Houle.

Stage 4 was an action-packed day starting with a huge battle to form a breakaway before a trio of riders were finally able to go clear after more than an hour of racing. Although the peloton kept the breakaway on a short leash in preparation for four laps of a punchy finish circuit, eventual stage and race winner Andreas Leknessund attacked solo from the breakaway.

Behind, Houle was part of a seven-rider chase group sitting around 30 seconds behind the Norwegian leader while Hagen and Neilands covered the yellow jersey group behind. Houle dug deep on the final two laps to ensure he would stay clear of the third group on the road and while his huge efforts prevented him from picking up bonus seconds on the finish line, the Canadian managed to finish 15 seconds clear of the next group to secure his podium position.

“The whole day was really fast. It was really chaotic at the beginning with lots of attacks until the breakaway finally went away. Leknessund deserved to win today, he was really, really strong. We tried really hard to bring him back on the final circuit and I thought maybe we could after he had done such a big effort so a big thumbs up to him. For myself, on the second climb we were going quite fast and I saw an opportunity to attack and I managed to get away with six other guys, including three from Alpecin – Deceuninck, so we had quite a good group and we were able to go about 40 seconds clear of the bunch. At that moment, I knew it was good for me as we still had Carl and Krists behind to play their cards. I did my best on the last lap. Alpecin attacked me on the last climb and if we had stayed together, I think we could have gone for the win,” added Houle. 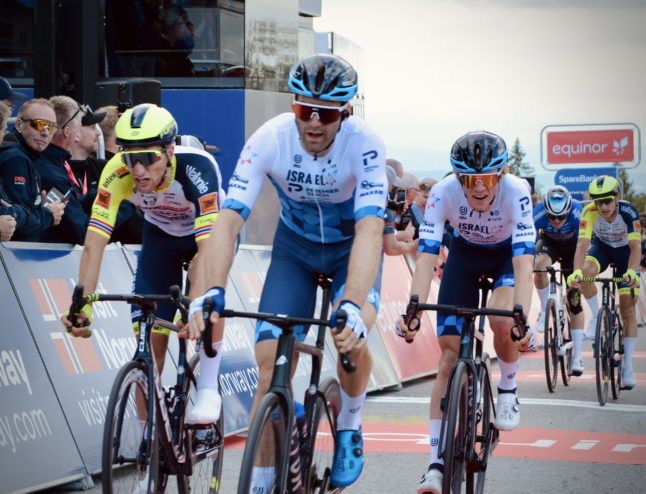 Hagen finished in the group 15-seconds behind and Neilands crossed the line another six seconds back in a testament to IPT’s teamwork throughout the past four days, said Sports Director Nicki Sørensen.

“In the end, our guys did a good race. Hugo did a beautiful race and it’s nice to see him having his best season ever by far. Carl Fredrik and Krists did everything they could behind and were able to finish in a good position on the General Classification as well. We had great support from Simon Clarke and our two young guys Sebastian Berwick and Cole Kessler were really able to learn a lot from this race. It was a wild stage in the end and congrats to the winner Andreas Leknessund, it was a super nice race by him,” said Sørensen.